“The LORD will fight for you while you [only need to] keep silent and remain calm.”. EXODUS‬ ‭14:14‬ ‭AMP‬‬ 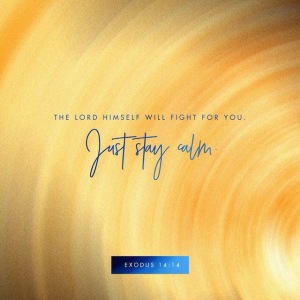 The children of Israel stood trapped … the Red Sea before them, the army of Egypt behind them. There was NOTHING they could do to save themselves! They needed a GOD sized miracle, and they got one. As soon as they stepped out in faith and their feet touched the water, the sea divided and “made a way when there was no way.”

As I read Exodus 14:14 this morning I was reminded of a recent situation where someone was literally spewing their anger toward God at me. Their friend had just lost a two month old baby and of course they were devastated and in shock at the seeming injustice of it all. As the young man continued to accuse God I felt the Lord tell me to be still. “I do not need you to defend me. Do not respond.”

You may not see the connection, but it felt as if I was being verbally attacked as a representative of God. It was not my battle to fight. Had I disobeyed the Lord, I could have done more harm than good.

When we feel helpless, we can be confident in the Lord. We can trust that He will fight FOR us. When we have done all that we can do, our battle becomes the Lord’s. As the Israelites had to step forward toward the sea, we are often called to fight in the war room of prayer.

PRAY:
Father, I thank you that “no weapon formed against me shall prosper.” As my Father, I can trust you to protect and provide for me. Nothing is impossible for You. Help me to recognize when I need to fight and when I need to simply be still and see the salvation of the Lord. When it feels like I am defeated remind me that I am not alone and that You will fight for me.