“Most assuredly, I say to you, he who hears My word and believes in Him who sent Me has everlasting life, and shall not come into judgment, but has passed from death into life.” John 5:24 NKJV 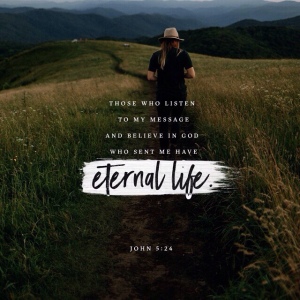 John 5 begins at the pool of Bethesda with Jesus healing a man on the Sabbath. The poor man had been sick for 38 years! Instead of rejoicing in the man’s healing and giving God glory, the Jews were outraged that He had done this miracle on the Sabbath.

The “signs and wonders” Jesus did had a duel purpose …

1. To benefit the one receiving the miracle. Jesus had compassion on the lost and hurting.

2. To bear witness that Jesus is the Son of God. Jesus knew there would be many “false” prophets throughout history who would claim to be the messiah.

I can’t imagine seeing the works Jesus did and NOT believing. Were the people so hard hearted they couldn’t see the truth that was right in front of them?

How would I have responded? How DO I respond today when I hear something that doesn’t line up with what I’ve been taught? How do I know truth? I go to the one who IS the truth … the way ..the life. (John 14:6) What did He say? That’s all that matters because He is the one the Father has given authority to execute judgment. (John 5:27)

Many people today will argue that we cannot “know” which religion, if any, is correct. I beg to differ. Many of the truths of the Bible have been confirmed by historians and archaeologists. More importantly we have a Savior who predicted His own death and resurrection and it happened! The body of Jesus was never recovered and over 500 witnesses saw Him after His resurrection. Many of these witnesses were killed because they would not recant their eye witness account. Who dies for a lie?

Our faith is NOT blind faith. Jesus fulfilled over 450 prophecies concerning the messiah.  According to David Williams, Computer Systems Manager, for the Mathematics Faculty, at the University of Newcastle, the mathematical probability of Jesus fulfilling just 48 of those prophecies is an incredible 10^157 (10 followed by 157 zeros)! The WORD is our witness. See: (Click here to read the full article)

PRAYER: Lord, Thank You for leaving the glory of Heaven to become a man and die for my sin. Thank You for giving us the Word as a witness, and for the undeniable proofs of history.

I believe in YOU! You alone give the gift of eternal life. Thank You for giving me life instead of death, mercy instead of judgement.

I pray Father for those who are blinded by the lies of false religion and/or secular culture. Open their eyes to see the truth Lord.

Use Your people to bear witness of You to our generation. Jesus said we would do even greater works than He did. (John 14:12) Lord, fill us with the power of the Holy Spirit! Reveal Yourself through modern day signs and wonders that cannot be accredited to anyone or anything except YOU!

In the majestic name of Jesus, AMEN!