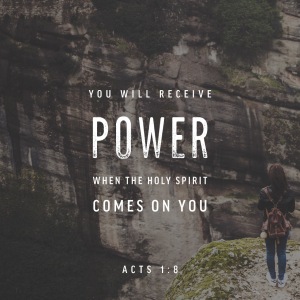 Have you ever met someone so power hungry they didn’t care who they had to step on to succeed? There’s nothing wrong with success or power in its self. It’s what you do with that power that determines your legacy.

“But you shall receive power when the Holy Spirit has come upon you; and you shall be witnesses to Me in Jerusalem, and in all Judea and Samaria, and to the end of the earth.” Acts‬ ‭1:8‬ ‭NKJV‬‬

These simple men who had given up everything to follow Him carried both the hope of the gospel and the responsibility of seeing it spread to the ends of the Earth. The Lord knew it was beyond their natural ability to accomplish. They needed to be empowered by The Holy Spirit.

On the day of Pentecost as they gathered together, the promise was fulfilled. The Holy Spirit arrived as a rushing mighty wind. The same Peter, who had denied Christ 3 times out of fear, now stood before a huge crowd and boldly proclaimed the gospel. Three thousand souls were converted that day, and the birth of the Church began … just as Christ had prophesied.

“And I also say to you that you are Peter, and on this rock I will build My church, and the gates of Hades shall not prevail against it.”  Matthew 6:18

That’s power, and that power is still available for you and I today! I’m hungry for the power of the Holy Spirit of God to flow through me so that others can be transformed by the message of the cross. If twelve men could change the world under the anointing of the Holy Spirit, imagine what you and I could do! Imagine the impact millions of POWER hungry, Spirit filled Christians could have if we became motivated to be His witnesses to a lost world.

The power of the Holy Spirit has purpose. It is not simply meant to help us live victorious lives … but to pass that power on to others. Jesus called us to be light to the world. When the Holy Spirit appeared He was represented by tongues of fire. I think that is significant in that while fire provides heat (power) it also provides light.

Are you power hungry? I hope so.

One thought on “Power Hungry”