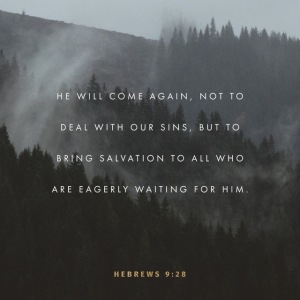 I was a teenager the first time I heard about the “second coming of Christ”. It was a central focus of many of the messages I heard during that time. We lived with an expectancy that Jesus would come at any minute. In many ways I believe it was a driving force in how we lived our lives. No one wanted to be like the foolish virgins in Matthew 25. We wanted to be ready and watchful.

One of the most vivid dreams I ever had was a dream about the rapture. In the dream I heard the trumpet sound and saw the skies split to reveal a breathtaking light, unlike anything I had ever seen. I ran next door to my neighbors house to try to tell them, “Jesus is coming”, but my hand could never make contact with the door as I tried to knock. I heard the voice of the Lord say, “Come away by beloved.” Then my body became weightless and I began floating effortlessly into the light. It was both exhilarating and terrifying at the same time … because I knew I was going to be with God, but my neighbor was being left behind.

“For the Lord Himself will descend from heaven with a shout, with the voice of an archangel, and with the trumpet of God. And the dead in Christ will rise first. Then we who are alive and remain shall be caught up together with them in the clouds to meet the Lord in the air. And thus we shall always be with the Lord.” – I Thessalonians 4:16-17 (NKJV)

Somehow over time I seem to have lost the urgency of preparing for this great event. Today’s photo was a reminder to me that I need to be eagerly waiting for the coming of the Lord. What would I do differently if I knew today was the day? Who would I reach out to that might not be ready to meet Him. How would I prioritize my time?

How about you … are you eager for the return of the Lord? Share the GOOD NEWS with someone today. After all, eternity is a breath away.

One thought on “Eagerly Waiting?”