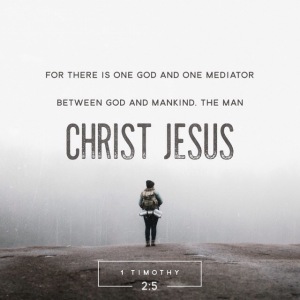 me.di.ate: to reconcile differences, to bring accord between parties as an intermediary

Jesus never claimed to a “A way” to God. He claimed to be “THE way” … the ONLY way. This is a hard pill for unbelievers to swallow. They find it arrogant and offensive, when in fact it cost Jesus everything to become “The ONE Mediator”.

There is nothing arrogant about knowing your identity. It would be ridiculous for someone to challenge my identity as the daughter of Robert Lee Adams, Jr., my earthly father. Jesus KNEW who His father was. He KNEW His mission and purpose in life was to reconcile us to God. It was the purest of motives that drove Him.

I love what my Pastor, Blake Bennett says, “If a man can predict his own death and resurrection and then pull it off, I can believe He is who He says He is.” Jesus IS real. He is a historical figure and His grave is empty! No other religious figure in history has overcome death.

You don’t hire an attorney and then resent him for pleading you’re cause before the judge. And yet the lost resent Jesus because they think He wants to judge and condemn them, when He actually wants to defend them. He wants to mediate our case before God and He is the only one qualified to do so. Why? Because He paid a debt we could never pay. He gave His life as a ransom for ours. He became sin, so that we could become righteous. He came to serve and he represents us pro bono!

The next time someone challenges your faith respond with confidence. Jesus doesn’t need us to defend Him. He calls us to share the GOOD news! Those who are called will believe. Plant the seed of faith and trust God to produce the harvest.