“For you did not receive the spirit of bondage again to fear, but you received the Spirit of adoption by whom we cry out, “Abba, Father.”” – Romans 8:15 (NKJV) 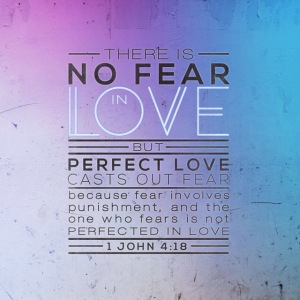 Fear produces bondage. It restrains you from moving forward. Even the bravest person in the world is afraid of something. To fear is human. We are born with an acute stress response known as hyperarousal. You may know it as the Fight-or-Flight response. This was first described by Walter Bradford Cannon as “a physiological reaction that occurs in response to a perceived harmful event, attack, or threat to survival.” The harm only has to be perceived, it doesn’t have to be real. The response is the same.

Jesus’ own disciples experienced fear, even though they had witnessed His miracles time and time again.

“Now when He got into a boat, His disciples followed Him. And suddenly a great tempest arose on the sea, so that the boat was covered with the waves. But He was asleep. Then His disciples came to Him and awoke Him, saying, “Lord, save us! We are perishing!” But He said to them, “Why are you fearful, O you of little faith?” Then He arose and rebuked the winds and the sea, and there was a great calm. So the men marveled, saying, “Who can this be, that even the winds and the sea obey Him?” – Matthew 8:23-27 (NKJV)

After Jesus’ death and resurrection these same men would go on to courageously spread the gospel, losing their own lives for it’s sake. What changed? How did they conquer their fear? Could it be that having seen Jesus risen from the dead, they finally grasped what He taught in Matthew 10:28: “And do not fear those who kill the body but cannot kill the soul.”

They moved from operating in fear to operating in faith. This doesn’t mean they pretended there was nothing to fear. They didn’t hide their heads in the sand and pretend all was well. They faced their fear with confidence knowing that God loved them and the reward of eternity with Him far outweighed the temporary pain and hardship of this life.

We too, must learn to face our fears – real or imagined. How much of our lives do we waste worrying over things we cannot control? Fear is a thief. It steals your peace, and if you allow it to, it will steal your purpose.

I am a worrier, but I have found that most of the things I worry about never come to pass. What a waste of time. I am learning to take my cares to the Lord in prayer and trust that His will WILL be done. Faith is the antidote to fear. If you are a worrier, I encourage you to find as many scriptures as you can about trusting God. Write them out, memorize them and use the sword of the Word as your weapon against fear when it attacks.

Prayer: Father, I thank You that You are more powerful than anything I fear. Because You love me, I know no matter what happens in my life, I can trust You. Help me to be a woman of faith, Lord. Help me to see things from the proper perspective. Nothing can compare to the joy that awaits those who serve you.